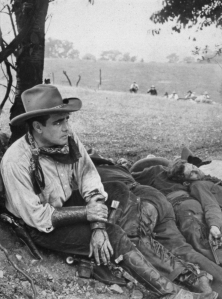 Like so many movie stars in those days, Edgar Jones began his career in the theater. Even there he was type cast as a cowboy and throughout his career he frequently played western roles, as well as the roles of Civil War General, and various outdoorsmen. Lubin is said to have hired Jones personally in 1912, after seeing him on stage in New York and deciding he looked like a cowboy in a Remington painting he had in his office. Jones headed up one of two permanent stock companies that filmed at Betzwood in 1912-1915. A studio press release described him this way in 1914: “Few players entering the field practically unknown have been so speedily made favorites by the public and have been so rapidly advanced by their management as has Mr. Jones.” Jones frequently produced and directed his own films while playing the lead roles in them.

Jones could be quite resourceful. On one occasion, upon learning that an old covered bridge in Delaware County was slated for demolition, he convinced local authorities to allow him to blow up the bridge on camera and built a scenario around it. Unfortunately, the film, On Bitter Creek,does not survive.

Jones was at first cast with Clara Williams for his early Betzwood roles. When she accepted a better offer in California in late 1912,  Jones was cast with Louise Huff. Jones and Huff married in 1914, though their romance was brief. They both left Lubin’s employment in 1915, and divorced in 1919.

In the early 1920 Jones formed his own production company, Edgar Jones Productions and produced a number of films in Maine. He is difficult to track in his later years. One report claims that he died in Los Angeles on February 7th, 1958.