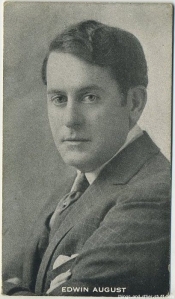 Edwin August was born Edwin August Phillip von der Butz on the 20th of November, 1883, in St. Louis, Missouri. He made his first stage appearance in “Little Lord Fauntleroy” at the age of seven. After years of  stage work, he made his first movies for the Biograph Company in New York City in 1908. There he appeared with Mary Pickford and was directed by D. W. Griffith. August came to the Lubin Company in the late summer of 1912 and was immediately cast opposite Ormi Hawley, with whom he made a series of films before leaving in December of that year. He worked for many of the early film companies, writing and directing as well as appearing in his own films. For a while he even had his own production company.  A popular actor, he was voted the most handsome matinee idol in a fan magazine’s national poll.  In 1916, August announced that he was running for president, making his opposition to movie censorship his primary issue. No one took him seriously, of course. The notion of a movie actor becoming president was considered impossible.  (NB: Ronald Reagan was five years old at the time.)

August successfully made the transition to sound films and continued to appear in movies until 1947. He can be seen as an extra in several famous films such as Mr. Smith Goes to Washington (1939) and The Magnificent Ambersons (1942).  Despite his success, August lived alone and very modestly in a small bungalow in Hollywood. He never married and there is some evidence that he was probably gay.  August died on March 4th, 1964, in Hollywood, and is buried in Valhalla Memorial Park.