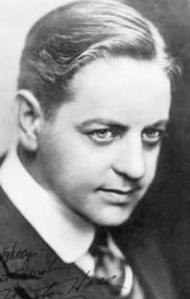 Ernest Thurston Hall was born on the 10th of May, 1882 in Boston, Massachusetts. Although he did quite well in school and even planned to go study at Yale, he decided instead to make acting his career. His first appearances on stage were with stock companies in New England while still in his teens. At the age of twenty-two he appeared in his first Broadway production in New York, playing the role of Mr. Bob in the popular play, Mrs. Wiggs of the Cabbage Patch. He went on to appear in the title role in productions of Ben Hur, and sang and danced his way through Victor Herbert musical comedies as well. He was a fixture in New York’s theatrical scene for more than ten years before deciding to try his luck making movies.

Hall came to the Lubin company in the summer of 1915 at the age of thirty-two. The Lubin Betzwood production, Sweeter Than Revenge, with Octavia Handworth and Rosetta Brice, was his first film. He also appeared opposite Lubin’s popular star, Ethel Clayton, but his work with Lubin films was limited by the fact that the Lubin company folded in 1916. Hall moved on to make films for numerous other studios, at one point playing the part of Mark Anthony in the 1917 Theda Bara version of Cleopatra. His movie career was quite successful; his rich baritone voice made it easy for him to make the transition to sound and he chalked up appearances in over two hundred fifty movies between 1915 and 1957.

In addition to his movie work, Hall continued to appear in stage productions well into the 1930s, at one point forming his own theatrical company and spending over two years touring England, South Africa, New Zealand and Australia. Hall played both leading men and character roles in his youth. As he aged he adapted himself to roles better suited to his changing appearance. In the early years of Television, he found new opportunities for his talents and specialized in portraying pompous and blustery authority figures like bosses, judges, and fathers of brides. He had a recurring role on the show, Dick Tracy, and was a co-star in the popular TV program, Topper, in the 1950s.

Thurston Hall was married to the actress, Quenda Hackett. He died of a heart attack at his home in Beverly Hills, California, on the 20th of February 1958. He was seventy-five years old.